There's not a corrections practitioner in the world who wants to be faced with any unknowns in their facility. To be safe they need to know, and see, just about everything that's going on at all times. That was the inspiration behind this week's subject about a facility design that eliminates blind spots. If it can be built, it might be the next great idea whose time has come.
Jim
Editor, Corrections.com

Out, out blind spot 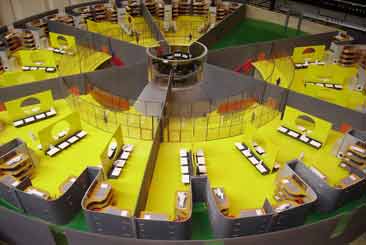 Somewhere along the way, the word “inventor” lost its cutting edge. What once implied someone imagining futuristic new ideas now brings to mind Thomas Edison hunched over his desk by light of a single burning candle. Inventing these days might seem like nothing more than a romantic notion, but all it really takes is seeing a need for change and having the guts to do something about it.

“People think that in most jails, inmates are constantly supervised, either by an officer or security camera, but that’s just not the case,” says Sonny Emerson, a modern American inventor and corrections veteran.

The reason for this, he explains, are “blind spots,” or places where inmate activity can take place outside the view of a security camera or officer. Blind spots can allow suicide attempts, rapes, and other attacks to go unwitnessed and undocumented. But Emerson’s OmniView jail design, which allows for the filming and archiving of every movement and square inch inside a facility, could be the first invention to eliminate these structural hideaways.

See what readers are talking about.

Let's hear what you have to say.

Last year, many states across the country reached or came dangerously close to their prison overcrowding and corrections budget breaking point. Full story

Most of what the public believes about correctional officers comes from old Jimmy Cagney movies, ridiculous and brutal shows like HBO’s “OZ,” or the highly popular “Prison Break.” Full story

To supervise a predator

Many of us may have already skimped out on our New Year’s resolutions, but the United States Congress is hoping to stick to at least one of its own... Full story

Bob Barker Company to Give $5,000 Grand Prize to the “Biggest Winner”

The nearly 200 employees at Bob Barker Company have an exciting challenge in front of them and plenty of incentive to go with it. More

The nearly 200 employees at Bob Barker Company now have access to 3,500 world-class online business and computer training courses with the implementation of an e-Learning program.

The nearly 200 employees at Bob Barker Company now have access to 3,500 world-class online business and computer training courses with the implementation of an e-Learning program. More

Ferguson Safety Products, Inc. is proud to announce the appointment of Jack Harris to Corporate Director of Sales. More

Date: 2/20/08
This course is designed to help you understand the world of deception. We give you insight to uncover truths or lies during your interviews and casual conversations. More

Date: 3/20 - 21/08
GangsAcrossAmerica.com is a website and intelligence group created by cops for cops and it is holding an intensive gang information-sharing conference on March 20th and 21st, 2008 in Las Vegas. This is the only conference that brings together the most respected and experienced gang experts from across America! More

"I find television very educating. Every time somebody turns on the set, I go into the other room and read a book."
- Groucho Marx (1890 - 1977), American comedian and film star.