The media frenzy surrounding Paris Hilton's jail time has no doubt created what should be an otherwise routine process into a circus with a national spotlight. Even though she doesn’t seem to be doing anything different from other offenders, the stories about Hilton's time at California’s Century Regional Detention Center are endless; one newspaper ran a piece about her making a Father’s Day card, another wrote an article about her possibly speaking out about the jail system and its flaws.

I wouldn't think a 45-day sentence could make one an authority on corrections issues, but her presence certainly is creating additional attention that the Century Regional facility folks could probably do without. The crush of entertainment reporters they're facing, though, should make facilities think about their media management plan. This week, columnist Leonard Sipes helps out by discussing the challenge of holding high profile offenders. Along the way, readers will find some helpful tips on handling those entertainment hounds willing to do practically anything for a good story.
Jim

Tell us what you think at editor@corrections.com.

Managing a media frenzy? Stick to the script.

By Leonard A. Sipes, Jr.

Strategies for dealing with the entertainment media 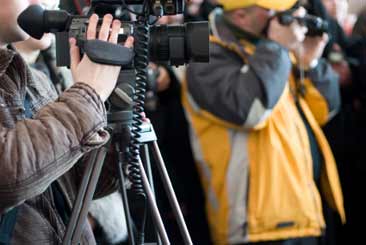 As all of you know, Paris Hilton is spending some quality time at the Los Angeles County Jail for a probation violation. Los Angeles County Superior Court Judge Michael T. Sauer ordered Ms. Hilton reincarcerated after jail officials allowed her to spend her time on house arrest after three days in the facility.

How would you handle the throng of media descending on you and your institution if you found yourself in similar circumstances?

In my 18 years of handling media for institutional and community corrections as the Director of Public Information for the Maryland Department of Public Safety and Correctional Services and the (federal) Court Services and Offender Supervision Agency, I responded to a wide variety of media requests regarding well-known offenders. Mike Tyson (on Maryland’s parole and probation caseload) produced endless calls. The “Beltway Shooters” who terrorized the Washington D.C. metro area several years ago were incarcerated in Maryland’s Super Max prison. They and many others produced a fair share of national and international media attention.More

Have a story idea or article? Send them to editor@corrections.com.

This one really hits the nail on the head. We have all stood by and watched (sadly) some of our fellow officers go "down the tubes" because of stress related problems, and the like. If you don't take time to do all the "normal stuff" that non-custody people do - have a family picnic, go to the zoo with the kids, have a "date-night" with your spouse - you're bound to experience problems.

I always held everything in, and it separated me from "real life" to the point where my family walked on egg shells around me. Then I finally realized what I was doing and sought help from a counselor. Come to find out, it wasn't just the job that was bothering me.

The point is, find SOMETHING to do, which in NO WAY relates to work. Grab hold of it with both hands, and enjoy it! You'll soon find the stress levels drop, your family doesn't seem so hostile towards you, and you are a happier person. If it doesn't help, maybe counseling would help. There is no shame in that.

And if it comes down to the fact that you're not really cut out for working in this line of work, find something else. The money will NEVER be this good, but LIFE will be better!!
Merv Jiet, CDCR Sergeant

Thanks so much. The article really hit home. I have been in corrections for ten years now, and I find a lot of officers have a hard time leaving it at the gate. A few of the things I like to do that helps - I am involved with the youth at my church. They keep me on my toes and we have a lot of fun. I take Martial Arts, which helps with meditation and stretching. Get involved outside of the job, and don't forget to take care of yourself.
Sergeant Alan Sprague, South Carolina Department Of Corrections

Letters to the editor can be sent to editor@corrections.com.
Please reference the article when sending a comment.

Every offender brings an array of issues; housing, health care, jobs and substance abuse are just the tip of the iceberg. According to DOJ research, a significant number of offender claim they have been subjected to child abuse and neglect or mental health problems. More

Does your facility ask its male inmates if they have children? Not all jails and prisons do, which means they overlook an issue that impacts the children’s risk of incarceration and the father’s chances of recidivism. However, more and more states are now focusing resources on incarcerated fathers, and the InsideOut Dad program, created by the non-profit National Fatherhood Initiative is spearheading the effort. More

Check it at the gate, avoid the burnout

A lot of time and effort is spent on ensuring our physical and tactical readiness should we have a major incident in our institution, or even in our community. Countless hours and dollars are spent by research companies working for law enforcement to determine the best and safest tactical practices for almost every conceivable situation; but very little time is spent on our mental well-being.More

The Federal Bureau of Prisons (Bureau) has licensed ATG’s Pharmacy Administration System for all its 114 institutions nationwide. The system has been successfully piloted and full deployment is expected to be completed in 24 months. More

Date: 7/8 - 7/11/07
Participate in over 70 educational sessions for all levels in the community corrections profession. Network with your peers at special events. View the latest products in the resource expo. Build your career--earn contact hour credit. More

Date: 7/8 - 7/11/07
The CEA Executive Board and 2007 Conference Chairs invite you to attend the 62nd CEA Conference in Atlanta, GA; the big city full of Southern hospitality. Workshop Proposals may be submitted electronically on CEA's web site, ceanational.org. More